My college writing assignments were emotional but scatological and grittily blue collar, similar to the New Mexicans who sat around campfires and “swapped lies.” I thought it was interesting and quirky, but in academia, it elicited tight lips, sideways glances, smirks exchanged between students, exaggerated tolerance from professors, and worst of all, that hateful silence. No reaction was as bad as the silence that followed my intercom advertisement at Mark Twain Elementary. It was as bad as telling Murgatroyd to shut up. To me, silence meant that something bad was present that I just couldn’t hear but suspected. Today, I know that was neuroticism. I tried not to worry about critics and pretended that they didn’t bother me, but actually, they always bothered me a lot. How much should I modify my prose to please them? I wondered. Was I smart to adjust, or did that make me a hack? How much should I acquiesce to formal education versus embracing self-expression as my art?

My moods were labile back then because I was too dependent on the judgments—even the imagined judgments—of others, and even on my own negative self-judgments. As far as I could tell, the beatniks and the hippies weren’t bugged that way. I wanted to be more like them. Their alienation, disaffection, and indifference—in the face of status quo and negative judgment—impressed me. Sure, they were a bit stark, and they irritated the suits, but I liked that too. I liked their rawness, their honesty, how they pushed against societal strictures. It’s preposterous to posit that all these folks had brain abnormalities, leading to personality disorders.

The Beat Generation was a group of American post–World War II writers who rose in the 1950s to become a cultural phenomenon. Think berets and bongo drums, cat, Allen Ginsberg, William S. Burroughs, and Jack Kerouac. They rejected accepted standards, created new styles, experimented with drugs and sexuality, and were interested in religion and spirituality. They rejected materialism. They explicitly portrayed the human condition, and that resonated with me, all of it. Elements of the beat movement were incorporated into the hippie and larger counterculture movements in the 1960s.

Still, despite these literary role models, if there were a hundred people in a room and ninety-nine stood and clapped when I walked in, my attention would go to the one guy who didn’t stand because I expectedrejection. As I aged, I learned that it was wrong to do this mental filtering, to pick out a single negative detail and dwell on it exclusively. Years later, I even told my own clients, Beware! Don’t let one critic be like a drop of ink that discolors an entire glass of clear water.

As an adolescent, I was a little confused regarding the difference between “normal” and “ordinary.” I heard “normal” as “conformity.” I thought normal was bad, the opposite of what my heroes wrote. How could I be an innovative writer if I were normal? Wasn’t that boring? I had to stick it to the Man, man! I was a near miss for the psychedelic generation, but I could still buck the system. Didn’t I make fun of squares? I pointed out flaws and irony. I brimmed with snarky asides. But how could I de-pants conformity and kick the legs out from under the establishment when I had no cause? I suppose—in the absence of a women’s movement, Nixon, or a war—it became self-indulgence. Ironically, the beats and the hippies were accused of exactly the same thing.

Today I use “normal” quite often in session. I illustrate it by drawing a bell curve in the air in front of me. I say, “What most people think, say, feel, and do falls under the fat part of a normal curve. See? Here. It’s what’s most commonly occurring, about 68 percent of time, so we call it ‘normal.’” Then my clients and I talk about the ugly things. We like to know how we compare with other humans. So we talk about the people who irritate them, the sexual things that pop into their minds that make them feel like perverts, and the violent things that convince them that they are truly horrible people and must hide themselves from civil society. Many of us are afraid we’re the only ones who have those thoughts. We’re afraid that we’re sick or crazy for thinking those thoughts. No one else thinks that, right? We fear rejection, so we bury those sicko thoughts. Then we feel shame about what’s hidden. It’s ego-dystonic, so it causes psychological distress. When we should express what’s inside, we depress it. I see a lot of depression in my practice. Talking about it is an exposure. It’s self-disclosure and almost always helps. Remember, psychologically, people needother people; it’s not a choice. The choice is the frequency, the depth of connection, and deciding who is safe to share ourselves with.

I’m fortunate because people sit across from me and tell me things they’ve never let out of their own heads before. They’re afraid they’re going insane. But they trust me to hear their darkness. The thing is, maybe I’ve heard similar things from clients over the decades, at least some variation of it, or have read about it. Maybe I’ve had those thoughts myself. I’m in a good position to normalize things for them, which can be a relief. It’s very intimate. The point is when we reveal our real selves to a safe person, it’s emotionally intimate and can even be healing.

I am a licensed clinical psychologist practicing psychotherapy in Scottsdale, AZ for over 20 years. I also publish psychologically-themed books dealing with impression management (i.e., The Chameleon Complex) and distance running. View all posts by Timothy M. Tays, PhD 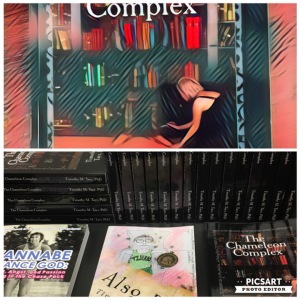